In large organizations, to meet the demands of internal processes, security, and the requirements of regulatory bodies, there is often a need for segregation of duties. To support these requirements, access to data, particularly live production data, should always be on a need-to-know basis.

The degree of segregation is an internal decision for each organization. That decision can be influenced by many factors, such as resourcing or the complexity of the site. Anaplan is able to support segregation of duties, as defined by an organization, using workspaces, roles, selective access, tenant administration, application lifecycle management, and import source remapping.

This example shows an implementation of application lifecycle management. The purpose is to explain the concepts behind segregation of duties and the factors to consider when designing and building environments to support it. These concepts can easily be ported to other scenarios such as workspaces for different geographic locations or to separate functional areas such as sales and marketing.

Live data in the Production workspace may be imported from either an Anaplan data hub or from external third-party sources. This table shows the data inputs to each workspace in this example:

Workspace administrators can use Source Models to remap production data import sources. For example, the models in the Test workspace might obtain data from a sanitized data model in the Development workspace.

Create meaningful roles that realistically represent the activities of user groups. Permitting some roles a greater level of access than others ensures that data is secured on a need-to-know basis.

The roles in a Development workspace may not need to be the same kinds of roles that are in a Production workspace. Thinking about the activities different user types will undertake, and designing roles accordingly, will make segregation of duties much easier to implement.

Bringing it all together

Access to workspaces, and consequently, models is limited by the role each user is assigned. Access can be limited at a more granular level by applying selective access to lists. All access rights need to support the processes undertaken in the workspace, for example:

This table illustrates a high level of segregation of duties.

You can see that:

This diagram shows the user architecture together with the synchronizations and data imports for the workspaces. At no point is production data accessible in the Test or Development workspaces—model roles ensure the site complies with segregation of duties. 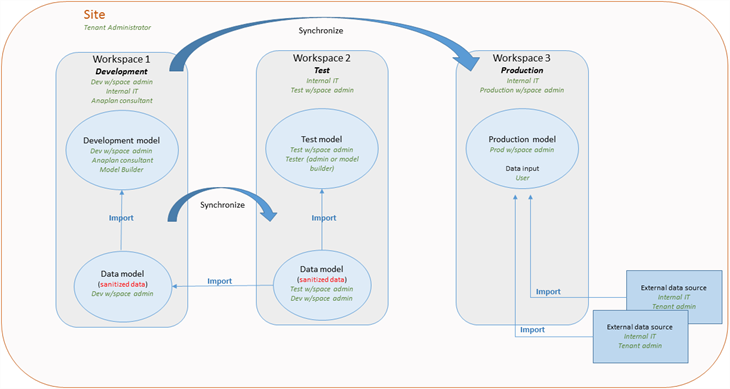 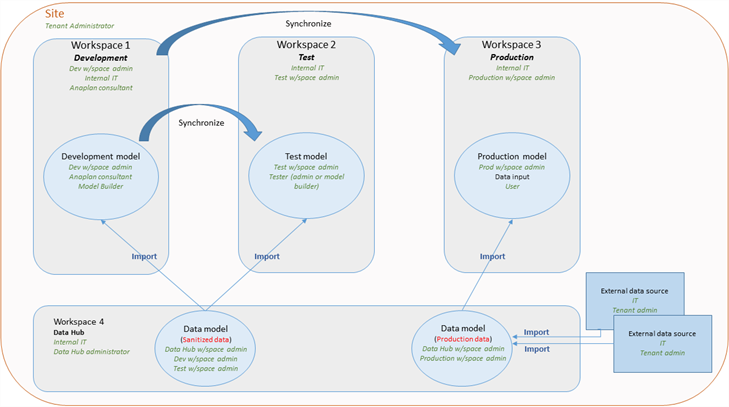 As you can see, production data is still inaccessible to users on other workspaces.