You can Undo data entry from:

You can undo the most recent change you made to a data value in Anaplan. When you undo your most recent data value change, a message displays the old and new value:

Undo data entry with multiple users on the same grid

If a user attempts to undo an operation that changed the data values in more than one cell, a dialog displays an abbreviated preview of the data change. Operations that can change the data values in up to 10,000 cells, such as paste, copy across, or copy down, can be reverted using Undo data entry. 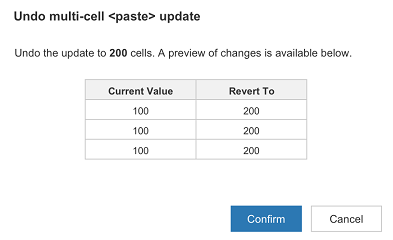 A similar preview is displayed if a user scrolls the dashboard or module grid so the most recently edited cell and value are no longer visible. If the user scrolls the value out of view and then selects Undo data entry, a confirmation dialog displays the value to be reinstated.

Undo data entry will not revert to the previous value when: 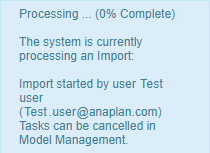 Each change to a data value in a grid is an operation; a collection of operations is a submission. If you change the values in multiple cells and they have a green background after editing, this indicates the server is busy: these changes can be sent as a single submission when the server becomes available. If a user attempts to undo after a multi-operation submission, a message may display Multiple updates were submitted in one batch - can’t undo, depending on how many operations were sent in the submission.

Undo data entry can only undo the most recent data value change: this message is displayed when it’s not possible to identify which operation in a submission the Undo data entry request refers to.

When reverting the value of a cell in a line item formatted to a numbered list, the undo message will display the unique identifier for the item, not the display name (except when there are duplicate values in Lists and Roll-ups > General Lists > Display Name Property).

For example, two items in a numbered list have the Display Name Property value: Robert Smith.

Suppose the grid cell initially displays one of the duplicate Robert Smith values, then the cell is edited to select any other value, for example James Jones. If you attempt to undo the data edit, a message displays showing an empty reverted value.

The grid is updated with a blank value, because the replacement value is not unique in the list of display names.

If a user selects Undo data entry after amending a Breakback total, it will revert to the previous value and Breakback will be re-calculated.

If you apply Breakback and then edit one of the distributed Breakback values beforeyou attempt Undo data entry, the edited value will be reverted, not the breakback total value.