You can connect to another model and import data from it.

Any import you run to bring in data from another model as source is subject to your role-based access on that source model. For example, if you do not have access to a module in the source model, you will not be able to import that module's data. Note that this restriction is based on the access rights of the user performing the import, not the user that set up the import definition in the first place.


The steps you must follow to connect to another Anaplan model to import data are explained below using a list import example. If you are connecting to another model to import a source module from that model, then the steps you follow when you have selected the module source are the same as when importing into a module using a file upload. See Importing into Modules.

Here, we'll import list data as an example of the general procedure for connecting to another model to import data. 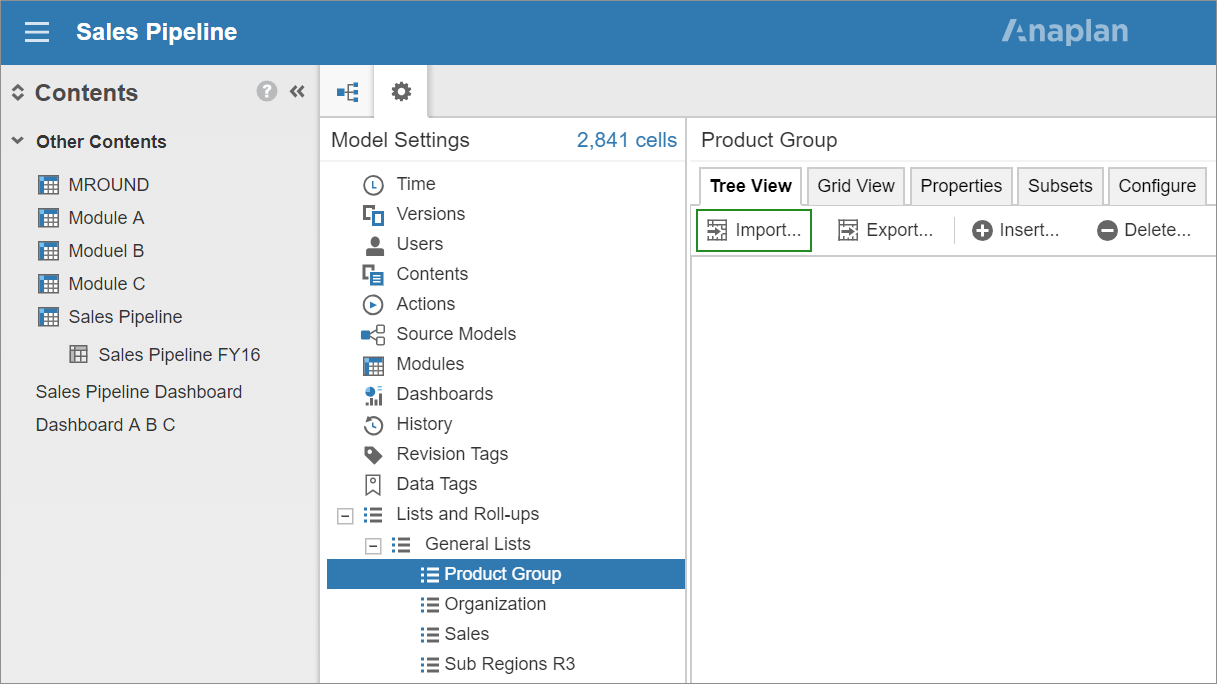 The default source for an import by connecting to another model is List and the lists in the selected source model are shown in the right box. Alternatively, you can select Module or Saved View and the dialog will adjust to show the modules or saved views of the source model in the right box.

If you have access to more than one workspace in the current customer environment, then the Select Source dialog will have a Workspace list where you can select another workspace for the model you want to connect to for import. If you select to import a module or saved view, then the list of modules or saved views will be filtered to show only those you have access to. 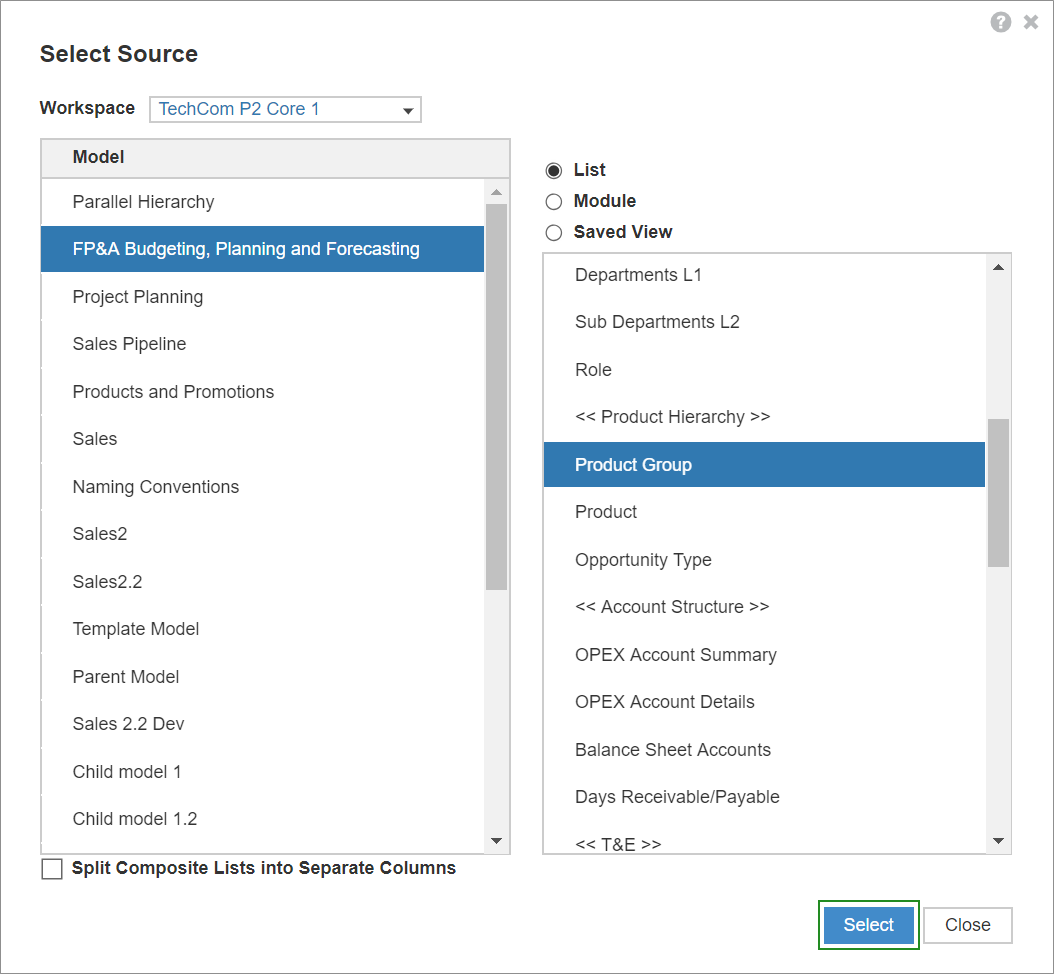 Here, we'll connect to the FP&A Budgeting, Planning and Forecasting model and import data from the Product Group list.

The Anaplan import process will match only against the names of source items, which will then be matched against the names or codes of target items. The import process cannot use any other property of the source items which is not displayed — such as code or property values — to match against the target items. In this way, Anaplan treats imports from another model in the same way it would a flat file that is imported from an external source. Consequently, if any changes are made to source item names, you must update the import definition to allow for the changes. 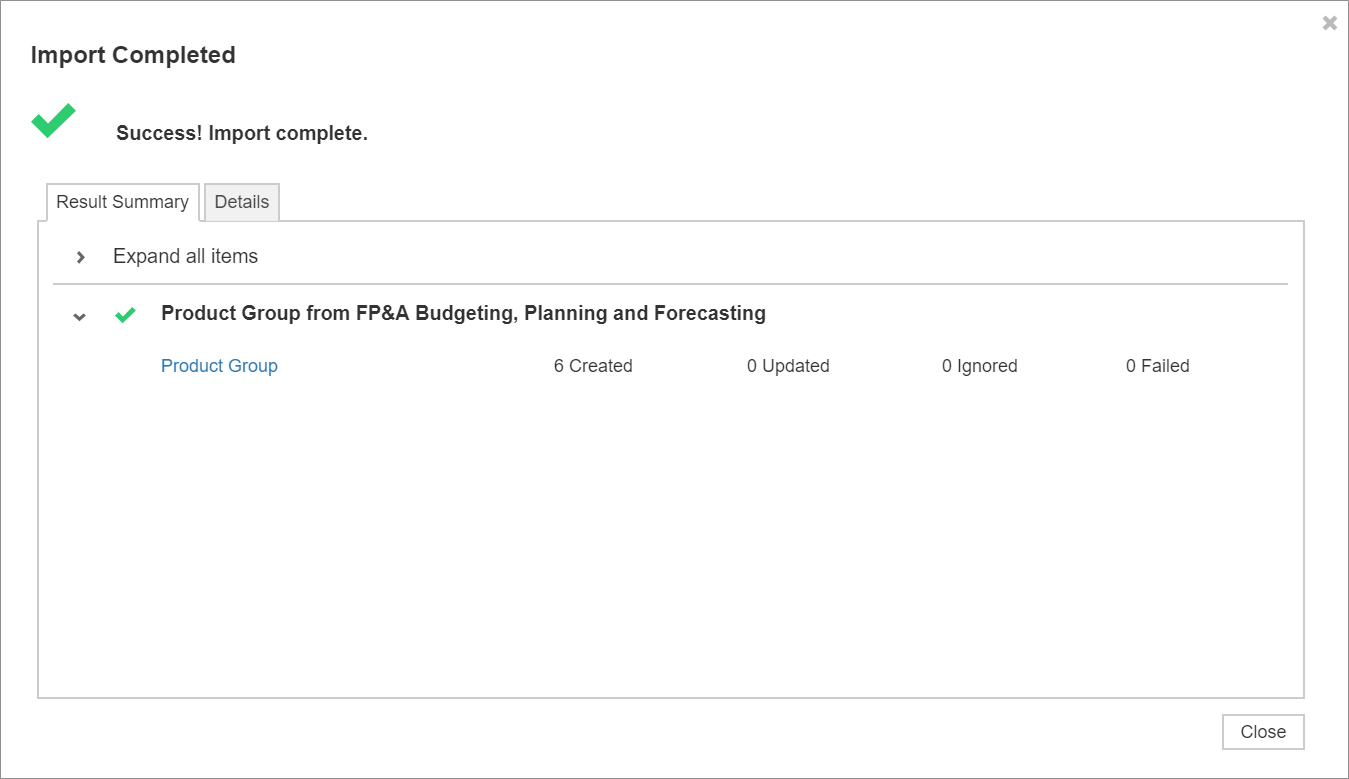 Here, the import completed successfully and 10 list items were created. If there are any errors or failings during import, these will be clearly flagged and you can open the Details tab for a detailed report. 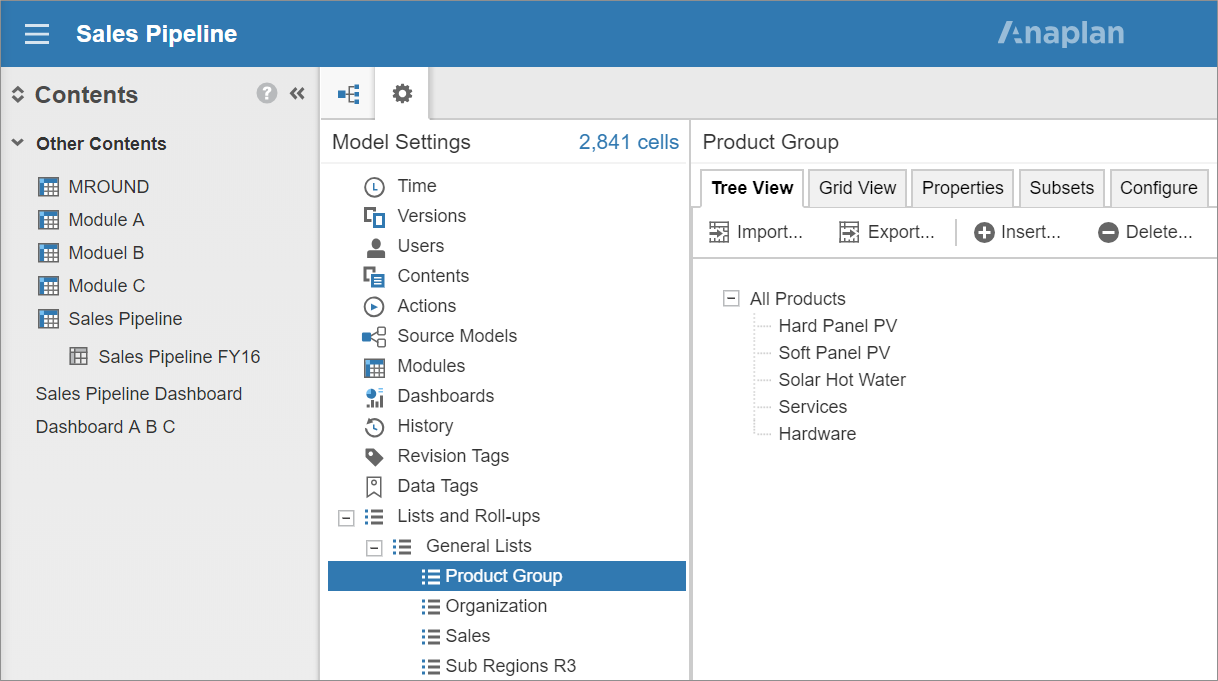 When you connect to another model to import data, in the Select Source dialog, you can select the Split Composite Lists into Separate Columns checkbox. When selected, any composite lists in the import source, including those used as module dimensions, are split into separate columns by list level.

If you import this composite list into another model and select Split Composite Lists into Separate Columns, the Mapping tab displays a separate column for every list level in the composite list: 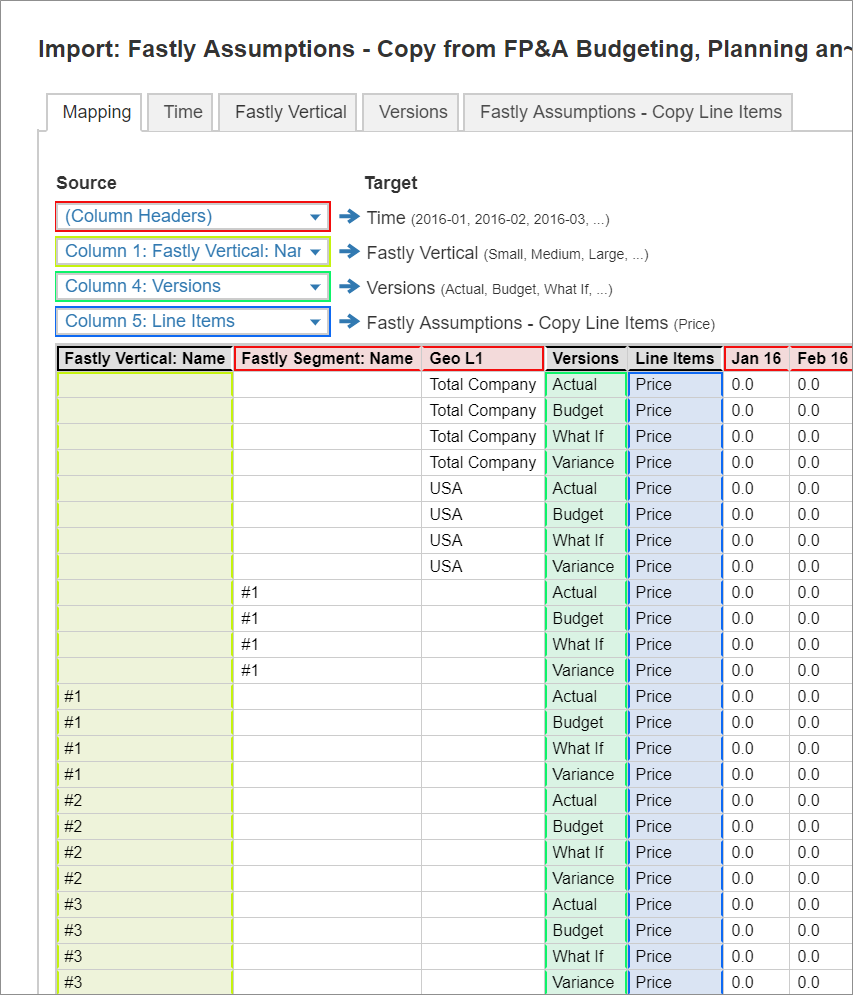 Note that data from identically-named list items is imported separately when Split Composite Lists into Separate Columns is selected. This makes the setting particularly useful for importing composite lists in which multiple list levels are numbered.

Using the regular mapping options, you can map a composite list to a target module with line items that apply to different levels.

The Split Composite Lists into Separate Columns setting can be edited on the import data source.

If you set up a model-to-model import and select a list, a module, or a saved view as the import source, the source is retained for future imports and made available to other users based on their user access rights.

If you select a file as the import source, you can decide whether to set a private file or a default file for the file import. By default, files are kept private. For more information, see Overview of Private and Default Files.

Whenever you edit or run an import, retained import sources are shown in the Select Source dialog: 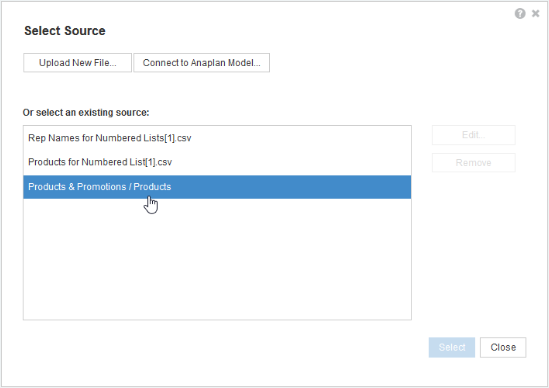 When you perform a model-to-model import, constraints based on user access rights to module and list data in both target and source model are applied and depend on the type of user performing the import.

The rules for respecting or ignoring user access rights when performing imports for module data are as follows: