This section contains some best practices to follow when using BYOK.

Ensure Workspaces are not in use

Workspaces can't be encrypted when they are active. Ensure that your users are no longer using any models in the workspace before starting encryption. Do not start encryption until the workspace state is Ready. 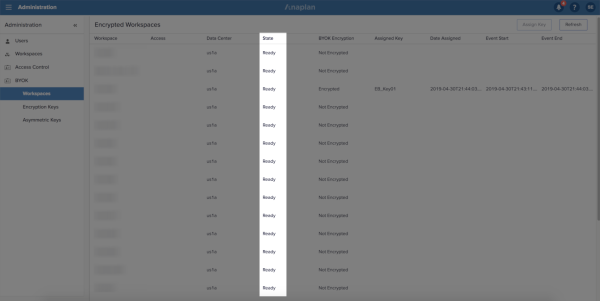 Identify users to be assigned the Encryption Admins role as early as possible.

Identify users to be assigned the Tenant Auditor role.

To maintain separation of duties, encryption admins should not have access to any model data.

Note: Only a limited set of users are eligible to be assigned the Encryption Admin role. Only users who were submitted to Anaplan as potential Encryption Admins appear in the Access Control section of the Administration app. If any users are missing, add them to the workspace in your tenant with the role No Access then contact Anaplan Support and request that those users are added to the list of eligible Encryption Admins.

The Tenant Auditor role can access the BYOK audit logs. You can choose to specify different users to the ones assigned the Encryption Admin role, and your Tenant Administrator can assign users to this role. Tenant Auditors need to be a user in at least one Anaplan workspace, ideally with a model permission of No Access.

When the BYOK status changes following a successful encryption or decryption action in a workspace, wait two minutes before running another operation on that workspace. This enables trailing processes to complete and helps to prevent unexpected errors.

We update Anapedia regularly to provide the most up-to-date instructions.