Examples of Importing Data into Lists

An example of the format required for the import of a multi-level hierarchy is shown below. The text file should consist of three columns: Item Name, Parent and Code. Only the Item Name column is compulsory. 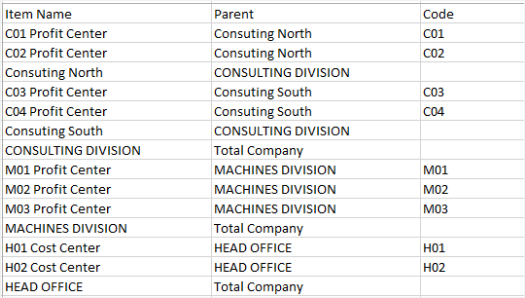 The text file below shows a typical text file that can be used to do an import. Two subsets have been created to identify which of the organizational units belong to the consulting and machine profit centers. This is a Boolean flag TRUE or FALSE that determines if it is included in the subset.

Can I import parallel hierarchies?

Parallel hierarchies are perfectly possible, but are not created as part of the import. Instead, import a list formatted property and use the SUM function to add up into the parallel hierarchy.

Can I import parent hierarchies?