Hold is a Breakback feature that allows you to temporarily ‘hold' values in cells, so that any changes (increasing a total for example) do not affect the value. You can release held cells once you've made your changes. It's really useful if you want to update totals without impacting a value for a line item or if you want to change values for a particular line item without changing the overall total.

Hold is not available for cells that are not linked to Breakback-enabled line items. Cells are held for the current user and session – they're not visible to other users. If you have held cells and then attempt to pivot the dimensions of a module, dashboard or view, the cell is released and all held cell information is lost.

Say you want to adjust a forecast. You might want to use Breakback to change a total but you don't want this change to affect some of the line item values. With the Hold feature, you can hold selected cells so that any Breakback calculation change doesn't affect them (the change to the total will only impact non-held items).

For example, if you want to change the value of a total for Q1 for which Breakback is enabled but you want the forecast for a single month to be unaffected by the recalculation, apply a hold to the cell:

The Feb cell is colored gray to indicate the hold.

If a change affects a total that is held, Breakback will run a calculation on the total and all other (un-held) cells are recalculated.

Q1 is held. If we update the value for Jan…

Anaplan takes the difference (40) and spreads it back to all un-held cells.

You can hold any numeric line item cells in a dashboard or module grid provided that the line item you are working with has Breakback enabled, including: 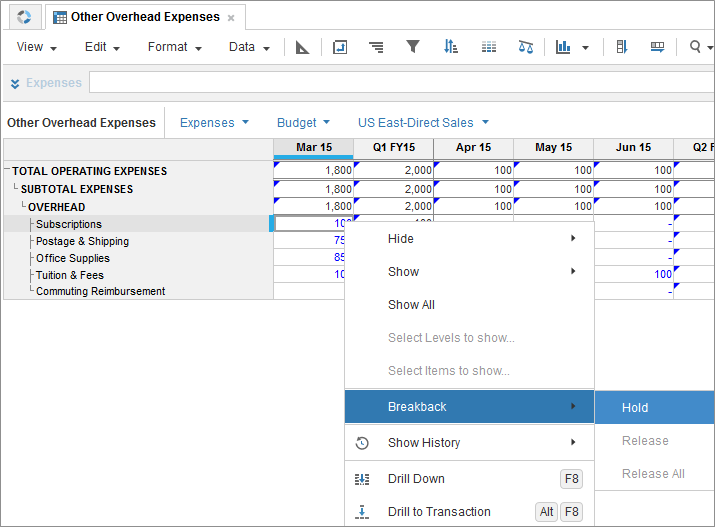 The held cell will color gray.

If the cell is already colored by conditional formatting, or the compare function is enabled, then the gray background will take precedence. If a filter is changed, or cells are unhidden, then any held cells are released.

If two users are editing the same data at the same time, held cells do not apply to other users. For example, if you were to hold cells and another user modifies the values of the data in the held cells, or if Breakback is executed, then the hold is ignored for the other user. The user who held the cells is informed that data has changed once they attempt to submit their own data and the grid is updated to the latest values.

You can release held cells at any time — right-click on the held cell, point to Breakback and click Release. Click Release All to release all held cells. Gray shading is removed.

If Breakback is disabled for a line item, any held cells are released.

If a row or column contains hidden items, or items are filtered out at the time a selection is made and held, only the visible cells are held. You can select the row or column header, but the header itself is not shaded (because not all items in that list are held).

If you subsequently change a filter or select Show All then any held cells are released.

If Compare, Conditional Formatting, Sort or Filter is applied to a grid, any held cells are released and all held cell information is lost.

Close a Module, Dashboard or View with Held Cells

If you've updated your data and applied hold to a number of cells, the cells are released on module or dashboard once you close.

When holding cells in a module, if that module appears on a dashboard on a different Anaplan tab, the cells are not automatically held – even for the same user.

This restriction applies all the time (not just when closing views), and also applies to views that are on the same dashboard or tab.

Change the Value of a Held Cell

You can change the value of a held cell. The system will set the new value and recalculate and the cell will remain held. If all cells in a selection or category are held and you attempt to change a value in a single cell, the recalculation will fail and the grid will revert to the initial value. A message to indicate that the calculation was constrained is displayed.