Overview of Private and Default Files

This is a Workspace Administrator feature.

This article explains the differences between private files and default files in imports and exports and helps you decide which type of file is most appropriate to use. It also describes how to:

About Private Import and Export Files

New import and export files are set as private files unless you choose otherwise. A private file is not shared with other model users and is removed if not accessed at least once every 48 hours. This means that:

A private import file is created when:

A private export file is created when:

About Default Import and Export Files

You can think of default files as "fallback" files: if a user's private file no longer exists for a file Import Data Source or file Export Action, the default file is used instead. A default file can be set for Admins Only or Everyone.

Workspace Administrators have the ability to set a default file when they:

API users: You can only set default files in the Anaplan user interface. A default file cannot be set when uploading files or running Import or Export Actions via the Anaplan API.

If a default file is set for a file Import Data Source:

In the case of exports, when a Workspace Administrator or an end user runs an Export Action, either in the Anaplan user interface or via the API, a new private file is created and exported.

We recommend that you always set default files for Administrators only. Default files set for Everyone are made available to all users in your Anaplan environment via the Anaplan API, not the user interface.

When you edit a file import previously set as a default file, you can switch the privacy level between Admins only and Everyone.

When you edit a private import file, you'll see the message "This file is not shared with other users".

Not Set indicates a private import file without a corresponding default file. 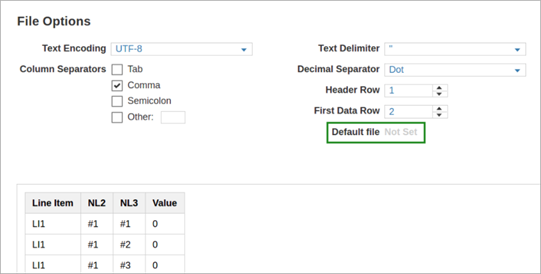 If you're uploading a file for which a default file is already set, you can choose whether to replace the default file with the newly uploaded file or upload a new version of the private file. Use the options in the Replace default file dropdown: 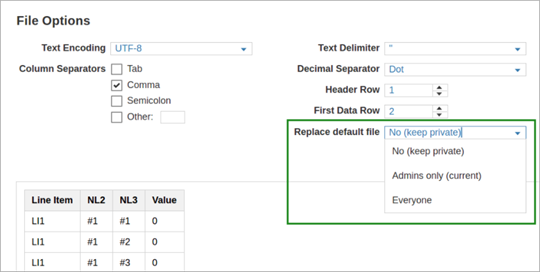 Access to Private and Default Files via the Anaplan API

The Download Files action allows Anaplan API users to download import and export files in chunks, based on their role.

If an API user has created a private file, either via the API or in the Anaplan user interface, they will receive their private file instead of the default file.

Setting default files via the API is not supported.

The following table summarizes who can access private and default files set for imports.

The following diagram summarizes which Workspace Administrators can access both default and private import files over a 48 hour period.