This article explains which special characters you can import into line items, lists, modules, or users, and those you should avoid. It also provides instructions on how to encode import files containing special characters.

We recommend the following:

This encodes your import file as the little-endian (LE) variant of UTF-16.

If you want or need to use the big-endian (BE) varient of UTF-16, open the import file in a text editor and save as UTF-16 BE. All applications, business systems, and databases that will handle the data should use the same variant of UTF-16.

The following example shows how to save and encode an import file containing Russian-language characters using Excel, and then import it into Anaplan.

First, save and encode the import file:

Second, import the file into Anaplan: 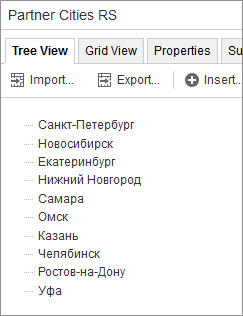 For more information on how to import data into each element, see Import.

Which Unicode characters can I import into my model?

Anaplan supports Unicode, with some exceptions described in the table below.

Unicode provides code points that can be combined to create a range of characters for different writing systems (scripts) and languages.

Unicode code points are organized into blocks on either:

You must make sure that Unicode characters are normalized prior to import.

For BMP languages, import list item names must be 60 or fewer Unicode units.

For SMP languages, a single character might be represented by multiple Unicode units. Therefore, a SMP language name that appears to be fewer than 60 characters in length might fail with the Invalid Name error message.